It’s a simple fact that the most effective thing we can do to cure more cancers is to catch them earlier. If we find bladder cancer at an early stage, the five year survival is 88%; if we catch it at a late stage, when it has started spreading around the body, it drops below 15%. This is why we screen for certain diseases, including breast, bowel and cervical cancer. These large-scale screening programs are the best hope we have for majorly reducing the toll cancer takes on our lives.

Screening, however, is hard. The main problem we face is accuracy. An ideal test would flag up 100% of sick people and 0% of healthy people. However, these tests are never perfect. There is always a percentage of sick people who are not flagged up (false negatives) and a percentage of healthy people who are incorrectly labelled as sick (false positives). And these problems can get pretty bad pretty quickly.

The following diagram illustrates this issue. It shows the results of a test that is quite accurate (one that has 90% accuracy) applied to a common disease that is present in 1% of the population.

As you can see above, what sounds like a good screening test results in 10 times more false positives than true positives, while it also tests one person as negative while they are actually positive.

In a large population, even a small percentage of error translates into a large number of misidentified patients. This can result in a crippling financial burden on the health system, as well as unnecessary worry, stress and pointless treatment for perfectly healthy people.

As a result, only extremely accurate tests can be used in the clinic, which is the reason we screen for so few diseases. So how do we get around this? Well, obviously we have to develop more accurate tests, and a lot of effort is currently being invested in this field.

Additionally, we can also improve things by being more selective about the people we screen. If a disease is present in 1% of the general population, but present in 5% of people over 65, then we can screen just the over 65s. 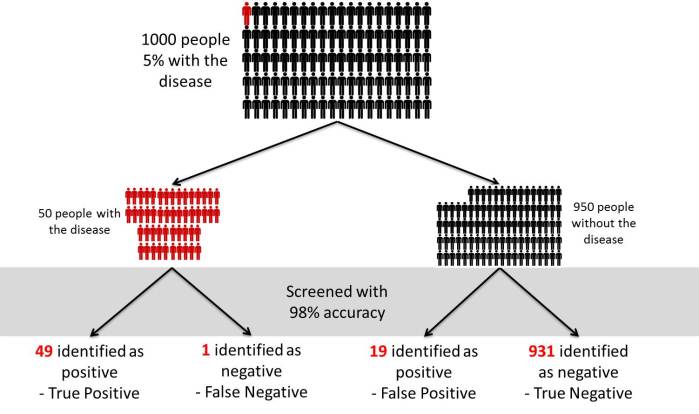 While it is understandable that research into a “cure” is more attractive than research into early diagnosis, the potential benefits of early diagnosis far outstrip that of drug development. Encouragingly, this level of funding is increasing steadily, and rose from 8.1% in 2002 to 12.6% in 2011. If this research can result in more viable screening programs, this will provide a significant clinical benefit to cancer patients.

For more information about screening, I’d recommend having a look at the sense about science website, which does a great job of describing not just this problem, but also many others that arise in screening populations for diseases.

One thought on “Why screening is hard”