Skip to content
HomeCan we predict cancer a decade in advance?

The Daily Mail, The Telegraph and The Independent are among the many media outlets that reported this week that we could predict cancer a full decade before it appears. Some outlets even went as far as to claim that we could predict it with 100% accuracy 13 years in advance. Unfortunately however, this is media hype of a study that makes claims its data cannot support, helped by a poor press release. There is some interesting science behind this headline, but the simple fact is that we cannot detect cancer that far in advance. If a news story appears too good to be true, then it probably is.

The cancer test that these articles are referring to is telomere measurement. Telomeres are protective caps on our DNA. They are found at the end of every chromosome and protect the DNA from degradation. They are often compared to the plastic tips at the end of shoelaces, which protect them from unravelling. They are needed because cells in your body divide at an incredible rate, and every time a cell divides new errors can be introduced to the DNA.

To try to get around this problem, every very time a cell divides the telomeres get a little shorter, and when the telomeres get too short, the cell stops dividing. This ensures that no more damage is accumulated, and makes sure that older, damaged cells stop dividing. As a result, telomeres play an important role in ageing (older cells have shorter telomeres than young cells), but also in cancer. Cancer cells, which divide indefinitely, are able to overcome this natural stopping mechanism by building their telomeres back up. Because of this, telomeres have been studied in cancer for decades.

This week, a study was published in EBioMedicine which tried to relate changes in telomere size with the odds of developing cancer. To do this, the authors tracked the changes in telomeres in our blood cells over the course of 14 years. They then looked at these changes in patients who developed cancer during the course of the study, as opposed to those who were cancer free. What they report is that patients who are going to develop cancer lose their telomeres at a quicker rate until 3 – 4 years pre-diagnosis, when the trend reverses and the telomeres loss slows down. They suggest that this could be used to predict cancer years before standard diagnosis is possible.

The paper has several problems, particularly with the interpretation of the findings. I have included a more technical explanation of some of these problems in “Further Explanations” below, but the authors themselves acknowledge some of these in their discussion.

“Thus, caution should be exercised in interpreting our results as different cancer subtypes have different biological mechanisms, and our low sample size increases the possibility of our findings being due to random chance and/or our measures of association being artificially high.”

They correctly point out that various cancers act very differently, and crucially that their conclusions may be down to pure chance. This type of correlational study (where measurements are taken and then compared with other things to see if they correlate) is useful as initial data to inform what needs to be studied further, but it is very prone to false positives. It is inevitable that pure chance will cause some correlations in the data. For example, in this study they also reported that less educated people have longer telomeres than their more educated counterparts. Whether this, or the correlation they found with cancer, is true or not can’t be determined without further study.

The scientific method is based on the reproducibility of experiments, with the more implausible the finding, the greater the need for repetition. In this case we have an implausible finding using questionable interpretations of the data. While it can’t be ruled out that there is some truth in this finding, it would need to be extensively studied further before any concrete conclusions can be drawn about telomere length in the blood and cancer. But for the time being, we can say that we won’t be predicting cancer with this method any time soon. 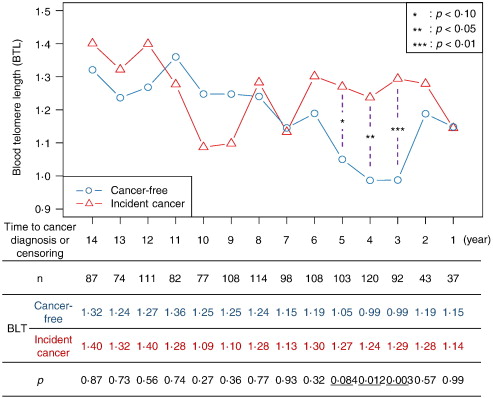 The biggest problems I have with this paper are in Figure 2 (above). Firstly, the authors base their conclusion on the fact that there is a statistically significant difference between the groups 3 – 5 years pre-diagnosis (demonstrated in the Figure with “*”). This seems like “cherry picking”, whereby people pick their data to suit their hypothesis. As you can see, any difference between the groups disappears in the 1 – 2 years before diagnosis, a fact that is ignored by the authors. Should their hypothesis be correct (and the cancer is causing decreased telomere degradation), the difference in telomere length should persist.

Secondly, the comparison they make in this figure is between the years before people got diagnosed with cancer, versus years before the end of the experiment. As the people who get cancer are inevitably younger than the people who get to the end of the experiment without it, the cancer-free people in this analysis are likely to be significantly older than those diagnosed with the disease. The authors have already shown that telomere length declines with age, so this could be playing a major role in the observed results.